Tug Hill is known for its abundant natural resources, including forests, agricultural land, streams and wetlands that provide environmental benefits and support the regional economy that is largely dependent on a working landscape. Commission staff is available to assist local towns and villages, as well as organizations and residents, in managing those natural resources to support both the environment and the economy. This assistance often takes the form of watershed planning and projects, recreational efforts, natural resource restoration projects, and support on regional natural resource issues.

For an overview of the value of the natural resources on Tug Hill, please read the Tug Hill Natural Resources Fact Sheet.

More detail on some recent natural resource projects and/or issues is provided below.

Maintaining connections between large forested areas like Tug Hill and the Adirondacks is critical for many wildlife species that require large ranges for survival. The Adirondack-Tug Hill Wildlife Habitat Connectivity Project is a collaborative undertaking by Tug Hill Tomorrow Land Trust, Adirondack Nature Conservancy, Wildlife Conservation Society, Tug Hill Commission and others to identify areas of the Black River valley that seem optimum for wildlife movement between the two regions. Over the past three years, current knowledge of wildlife needs, computer modeling and on-the-ground data have been used to identify areas of special interest regarding wildlife movement.

Two priority areas have been identified through the work so far, one of which is the mostly forest and farm area in Northern Oneida County. Implementation of some measures has begun in that southern linkage (the towns of Ava, Boonville, Forestport, Remsen, Steuben, Trenton, and Western) to maintain and improve the landscape for wildlife habitat. 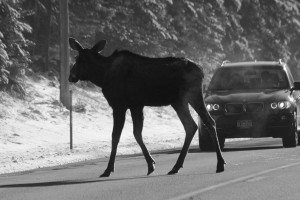 Radio ad about water quality below!