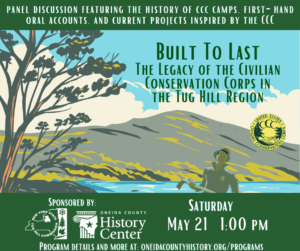 Join the Tug Hill Commission and the Oneida County Historical Center as we explore the legacy of the Civilian Conservation Corps (CCC) throughout the Tug Hill Region.

The CCC, fondly known as Roosevelt’s Tree Army, was a public works program developed under President Roosevelt’s New Deal. This program offered paid opportunities for young men during the Great Depression to sow the seeds of environmental conservation and civil development projects throughout the United States. Join us to hear about the history of CCC camps in our area, projects undertaken by the Corps, and first-hand experiences from a former CCC member about life at the camps.

Charles Vandrei, Historic Preservation Officer, Archeologist NYSDEC Division of Lands and Forests. Chuck will discuss the impacts of the CCC throughout New York State including the development of parks, state forests, and fish hatcheries among additional projects.

Ann Harrison, Chief, Bureau of Environmental Education at NYSDEC, will share information about the current Excelsior Conservation Corps, and Student Conservation Association projects at the NYSDEC.