Copies are available from all of the aforementioned organizations 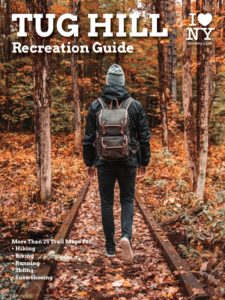 The Tug Hill Commission 2020-24 Strategic Plan was adopted by the commission board in October, and is available at https://tughill.org/strategic-plan/.

The new plan reaffirms the commission mission, approach and core competencies, and emphasizes the importance of circuit riders especially in the light of recent Council of Government growth.  Looking forward, the commission will spend more time on economic development, regional analysis, and marketing Tug Hill.  Training and skill development will continue to be a high priority, and the importance of partnerships and leveraging outside sources of funding is critical.

A lively, interactive presentation by Center for Community Studies researchers Joel LaLone, Larry Danforth and Andy Draper, on the attitudes and perceptions of Tug Hill residents and landowners, was the highlight of the commission’s annual meeting on November 7.  Approximately 60 people attended the gathering at Tug Hill Vineyards.

The full survey results are available on the commission’s website at:  https://tughill.org/about/survey-2019/.

Historic Preservation for Rural Local Communities is now available on our website.

The 2019 NYS Legislative Session has ended, and while the long-standing minimum maintenance road legislation continued to be active, it was not passed by both houses.

The Senate bill, S2910 sponsored by Senator Griffo, was approved out of the Senate Transportation Committee with new chairman Senator Kennedy from Buffalo, and passed the Senate on June 13.  The companion Assembly bill, A3724 sponsored by Assemblywoman Gunther, was referred to the Assembly Transportation Committee with new chairman Assemblyman Magnarelli from Syracuse.  Although not reported out of committee, many meetings and discussions were held that improved communication and laid groundwork for next year’s legislative session.

During the break between sessions, commission staff will continue discussions with partners and look for opportunities to explore forward movement on the issue.